It may not have escaped your notice that times are somewhat stressful at the moment. A lot stressful. And life in the newsroom means that I can’t exactly ignore what’s happening in the world at any given time. Never have I been more glad that I stopped reading dystopian future novels a few years back. I’ve explained before that newsroom life is why I read a lot of romances and mysteries even in normal times – but that is even more true now – as recent Week in Books posts atest. Romance novels and mysteries both have a pact with the reader going in –  in a romance you’ll get a Happily Ever After (or a bare mininum Happy for Now if you’re reading New Adult or something with teen protagonists) and in mysteries the bad guys will get caught. But in uncertain times, rereading old favourites can also  help. So here are a few recommendations from me for fiction to help you out if you’re feeling a bit anxious. 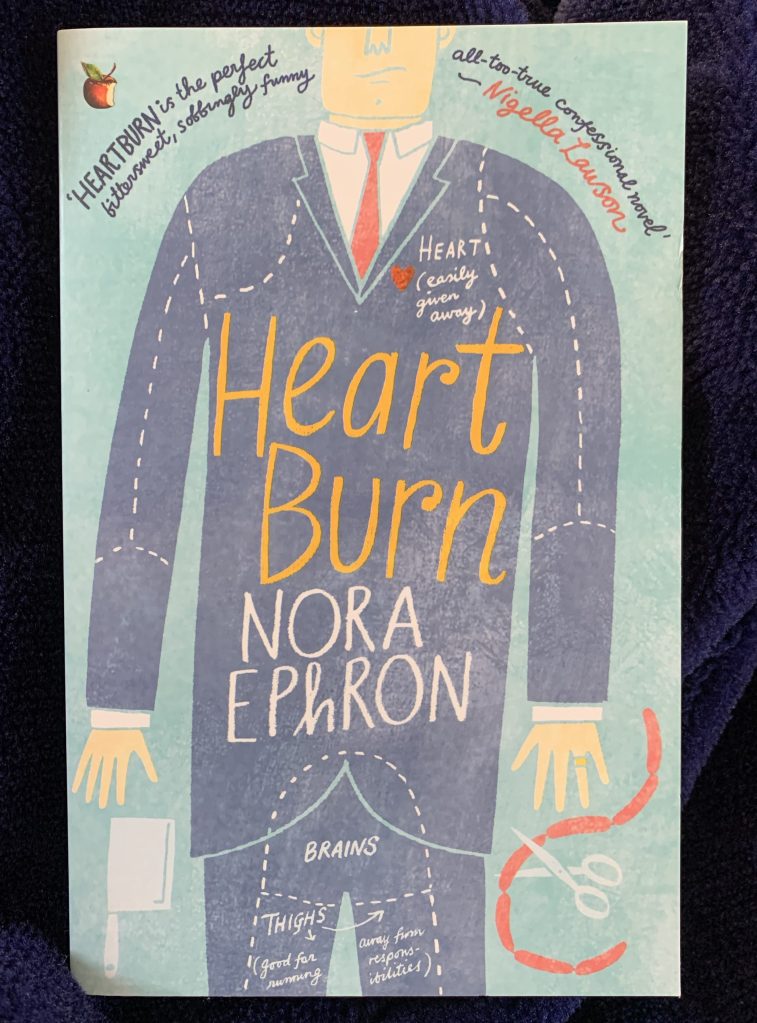 If you like Ephron’s films like When Harry Met Sally (and to be fair any other rom coms of that type) and you haven’t read Heartburn – then what are you doing? Heartburn is a fictionalised version of the break-up of Ephron’s second marriage – Rachel is seven-months pregnant when she finds out her husband is in love with another woman. Now if that sounds like an unpromising start to a novel to cheer you up, bear with me. This is so, so funny. Rachel can’t decide if she wants her ex back or wants him dead, and in between there is some great cooking. When I was asking Twitter last week for recommendations to cheer me up, this one was suggested and it reminded me how much fun it is – I read it in paperback seven years ago and still have my copy – and regular readers will know that not all books last that long on my shelves… 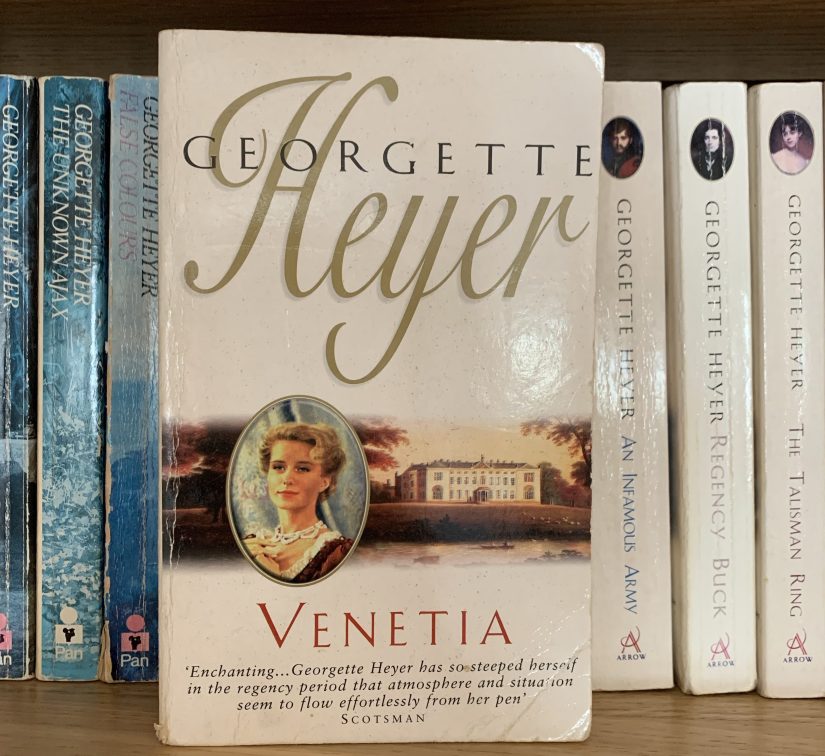 I have written an authors I love post about Heyer before – but it’s over my statute of limitations, so I feel justified in recommending Venetia again and more fully here. One of my favourite tropes in historical romance is the reformed rake and this is the uber example of the genre. Damerel has been breaking rules and shocking society ever since he ran off with someone else’s wife when he was just out of university. Venetia lives on the neighbouring estate to the ancestral home that he’s been avoiding since time immemorial. She’s feisty and independent and has been running the household for her older brother who is away in the Napoleonic Wars. When he does return home and runs into her, he’s fascinated – against his will – but it turns out she’s more than a match for him.  It’s romantic but it’s also funny – Damerel and Venetia spar with each other delightfully but there’s also a cast of secondary characters that are made for comic moments. I love this so much I have it as an audiobook as well. Just joyous. 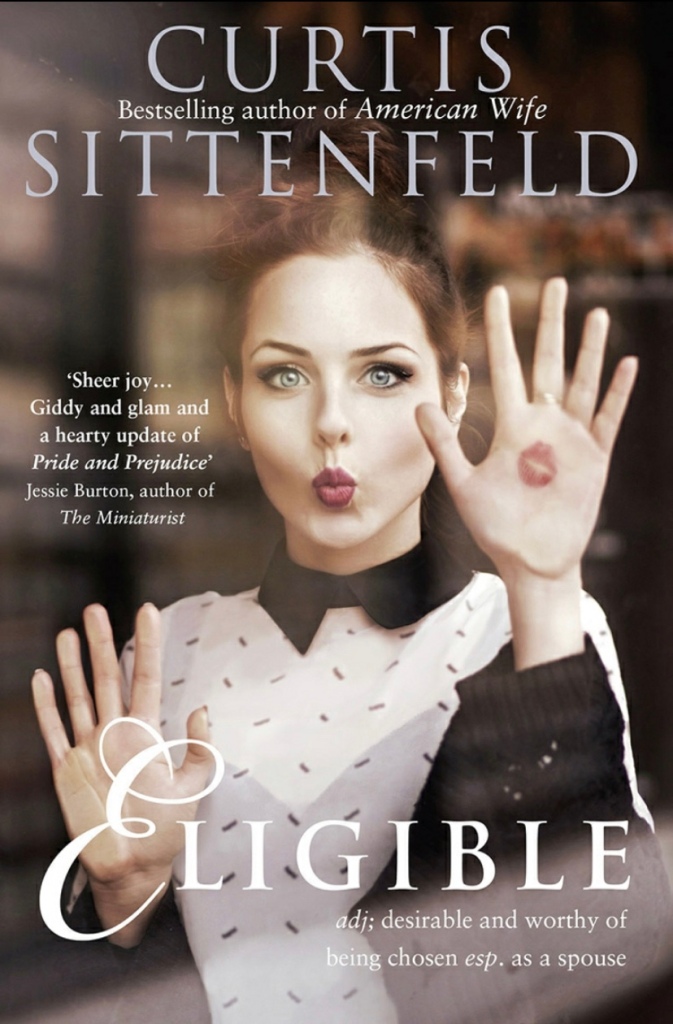 I love Pride and Prejudice, but if you’ve already reread that and watched your favourite of the adaptations, this might be the book for you. Sittenfeld moves the story to contemporary Cincinnati and updates the story accordingly. Bingley is a doctor from a wealthy family who became famous on a TV show similar to The Bachelor, Darcy is a neurosurgeon (and anyone who’s watched Greys Anatomy knows about the egos there) the Bennets are a trustfund family running out of cash: Jane is a yoga instructor, Lizzy a journalist for a women’s magazine, Kitty and Lydia are heavily into Crossfit. The update works, the dialogue is witty, there’s hate sex and reality TV and it’s really funny. I’ve read a lot of P&P retellings and continuations and I think this is still my favourite. It was one of my favourite books of the year back in 2016, but I’m counting it as over the statute of limitations because I think it might be what you need at the moment. In picking it up off the shelf (one of the downstairs ones because I like it handy) it’s made me want to read it all over again – although my copy is a big format paperback advance copy, so it’s also made me wonder about buying its on kindle too, because that’s where my head is at at the moment.

Diary of a Provincial Lady by E M Delafield 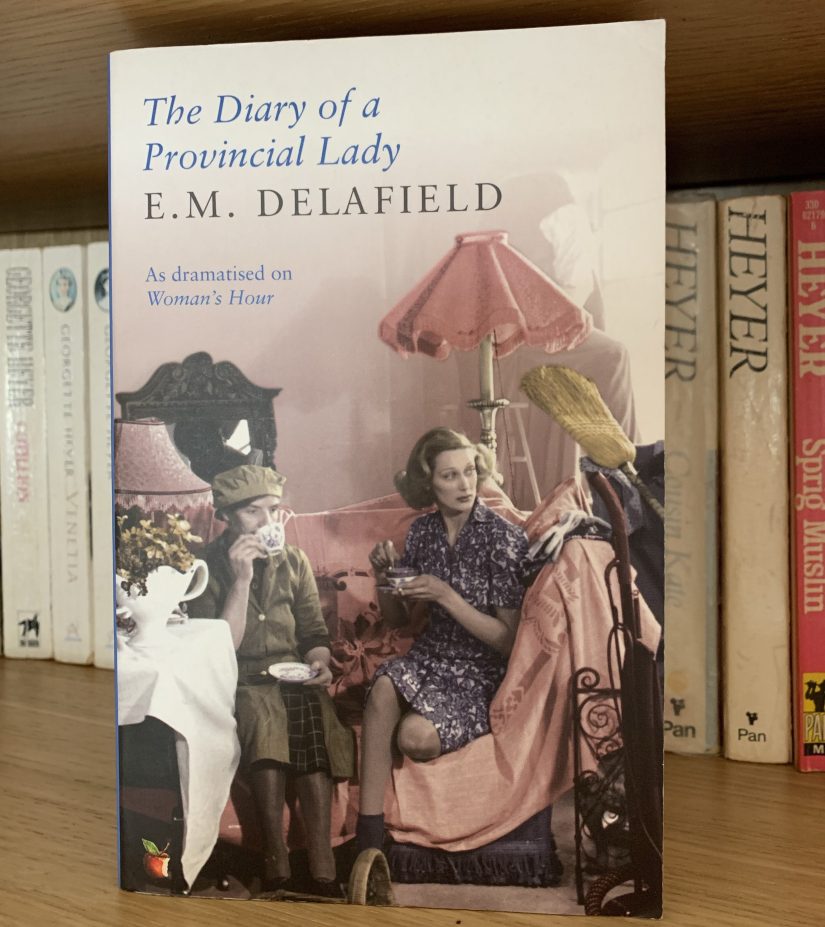 The Provincial Lady lives in Devon, in a nice house, with a nice husband and (mostly) nice children. Her husband is not a vicar, but if you’ve ever watched the Joan Hickson Miss Marples, she’s a bit like Griselda in Murder at the Vicarage – there’s an image that she needs to live up to, but how does everyone else make it look so easy? Written in the 1930s, it’s wickedly funny and very low stakes and sufficiently different from the reality of day to day life at the moment that I think it makes a lovely escape that doesn’t make you wish about what could have been.  And if you read this and like it, there are sequels – my paperback is an omnibus, which is great, but did mean that I couldn’t justify buying the pretty Virago designer hardback with the Cath Kidston print cover.  Angela Thirkell does a similar thing in her Barsetshire series – the trials and tribulations of various bits of the not quite gentry in the interwar period. And if you want less housekeeping and more village scandal, then try Miss Buncle’s Book by D E Stevenson – in which an unmarried lady discovers that her income is drying up and turns to writing fiction to make some money. Trouble is, that the book she writes is based on her village…

And as well as all of these, there are a few others that I’ve written about within the statute of limitations for a repost that you might really quite like, for example:

To Bed with Grand Music by Marghanita Laski – need an antiheroine in your life? Meet Dreadful Deborah who can rationalise whatever awful thing she wants to do in her quest for a glamourous bohemian life in wartime Britain while her husband is on a posting to Cairo.

The Seven Husbands of Evelyn Hugo by Taylor Jenkins Reid – need some Old Hollywood glamour and scandal? I’ve talked a lot about Daisy Jones and the Six, but this should also not be ignored. Evelyn is a reclusive Hollywood star who grants rare interview to a junior reporter at a magazine – and stipulates that she will only do the interview if it was with her. It turns out that what she really wants is for Monique to write her biography – it’s the opportunity for a life time for Monique but why has Evelyn picked her? Oh and it’s 99p on Kindle at the moment!

And writing this post has made me realise that there are a whole bunch of series that I love that I have not yet written about – and that’s really perked me up and given me some stuff to reread and write about!