When I added the Campion Christmas stories to the festive reading blog, I realised that I hadn’t ever written a Series I love post about Margery Allingham’s detective and so one was really somewhat overdue.  So, to start off the new year, I’m putting that omission to rights.

Albert Campion – not his real name – is a detective and problem solver.  He’s got an aristocratic background that is hinted and and has to be pieced together* – and many sources say he started as a parody of my beloved Lord Peter Wimsey.  Indeed as well as their family history, their physical description is fairly similar – Campion is thin, blond, wears glasses and has a face that is described as bland and inoffensive and as having a deceptively blank expression.  Wimsey by contrast is describes as being fair, average height, with a monocle and with a vaguely foolish face.  You see what I mean?  But as the books go on Albert is definitely his own man and a character in his own right.  He’s more of an adventurer and a man of action than many of his Golden Age Counterparts – and more often on the edge of the law.  Where Wimsey has Bunter – a gentleman’s gentleman with a flare for photography and chemistry – Albert has Lugg, an ex-con with a passion for trying to better himself but constantly being reminded of his past as he and Albert encounter his former criminal associates.  Albert’s friend in the police is the detective Stanislas Oates, who over the course of the series rises through the ranks of The Yard to become its chief.

The Campion stories tend more towards the adventure than straight up detective fiction – for example, my particular favourite is Sweet Danger which sees Albert posing as minor royalty at a foreign watering home and then attempting to outwit a criminal mastermind in the hunt for documents to prove who the ruler of a tiny but oil rich principality is.  There are chases, and a treasure hunt, and evil machinations and attempted witchcraft and it all builds to a very satisfactory conclusion.  The one in the series which gets most attention is The Tiger in the Smoke – which is a thriller not a detective novel – as Albert tries to track down a psychopath in foggy, smoggy London.  I also really like The Fashion in Shrouds, in which Albert’s fashion designer sister (also estranged from the aristocratic family) falls under suspicion after two deaths that are rather convenient for her best friend. 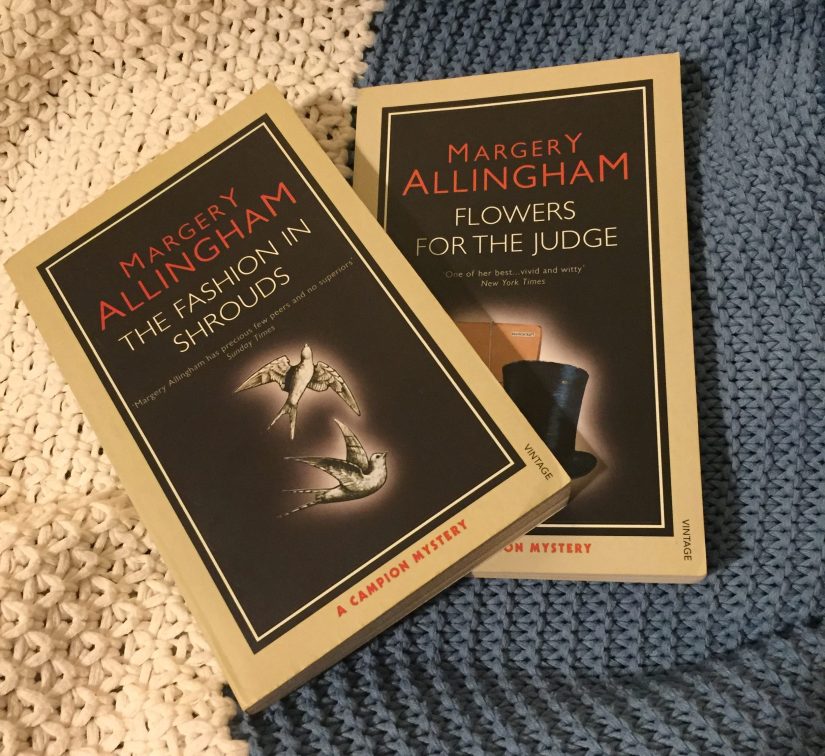 The series started in the 1930s and ran through until the 1960s, so I need to add my usual caveat about there being some dated attitudes and language in some of these – particularly the Fashion in Shrouds if I recall correctly – which means that the modern reader needs to approach with slight caution, but I don’t think there’s anything worse here than there is in Christie or Sayers.

There are 19 Campion novels written by Margery Allingham, two more written by her husband (who completed the final Allingham novel after her death) and then another five modern continuations by Mike Ripley.  I’ve read most of the Allingham written stories – although interestingly I think Campion’s first appearance, as a side character in The Crime at Black Dudley, is one of the ones in the series that I haven’t read.  I can almost see your puzzled face at this – but I have an explanation: I discovered Campion when I was living in Essex and on a very tight budget.  I was reading my way through the local library’s detective selection and they had a whole shelf of Campions – because Margery Allingham was a local author.  I promptly read my way through as many as I could lay my hands on – but it was pre-goodreads and I wasn’t keeping track.  I still don’t own many of them – a fact which has hampered me not inconsiderably in putting this post together!

There were also two series of TV adaptations in the early 1990s, starring Peter Davison as Campion, which do occasionally pop up on TV (usually on Alibi or Drama) which are fun if not entirely faithful to the plot and a bit clunking in places.  They’re definitely not as well put together as the Joan Hickson Miss Marples for example, the David Suchet Poirots or the Inspector Alleyn adaptations, but if you like the books then they’re worth a look as a curiosity if nothing else.

I’ve got a couple of Campions as audiobooks too which has actually been a really nice way to revisit the series.  Once I get my audiobook and podcast backlogs back down and under control, I’m planning to get a few more – and fill in some of the gaps in the series.

If you’ve read any Campion books – or have a favourite – let me know in the comments!

*And I can’t remember all the pieces at the moment!

Follow Verity Reads Books (lots of them) on WordPress.com
Join 1,625 other followers