I’m going to be honest – I really struggled with everything last week. I’ve lost track of how long this has been going on for, what day of the week it is and everything is blurring into a mass of same-ness. My concentration was a bit shot and it was easier to watch Drag Race than it was to read anything – and I found that really hard to deal with because reading is usually my escape and go-to fix for when I’m feeling blue. Fingers crossed things improve a bit this week.

A Dangerous Engagement by Ashley Weaver

A Cowboy to Remember by Rebekah Weatherspoon

The Papers of A J Wentworth BA by H F Ellis

He Dies and Makes No Sign by Molly Thynne

The Cuckoos of Batch Magna by Peter Maughan

Logging Off by Nick Spalding*

The Fall of the House of Byron by Emily Brand*

The Better Half by Sharon Moaelm*

Bonus photo: My week has been very boring – just around the house and all the bits of London I’ve already sent you pictures of, so here’s something a different. Not my upcycling, but my parents – painting a bench my great-grandfather made in the 1950s. Why did I pick this? Well it felt like something productive, but also because this bench featured highly in pretend games I used to play with my friends when we were little – and these were heavily influenced by what we were reading. So this featured as various things in games about boarding schools, ballet dancers, the Faraway Tree and more. We think it played a petrol pump at one point – although I have no clue what we were playing at that point! 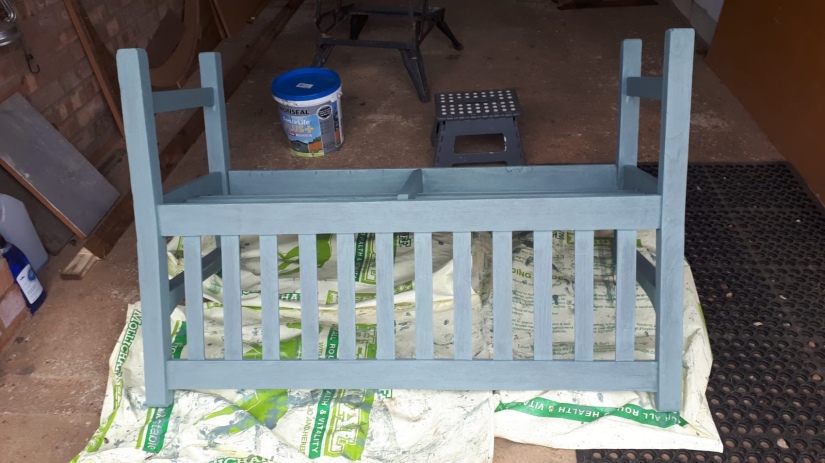