It was a bit of a post-holiday come down week in reading, in fact I only bought The Division Bell Mystery in Cambridgeon Sunday, but I read it on Sunday afternoon and evening and it was so good. And also, in case you missed it, it’s an important week for the British Parliament this week, so it seemed an apt pick. 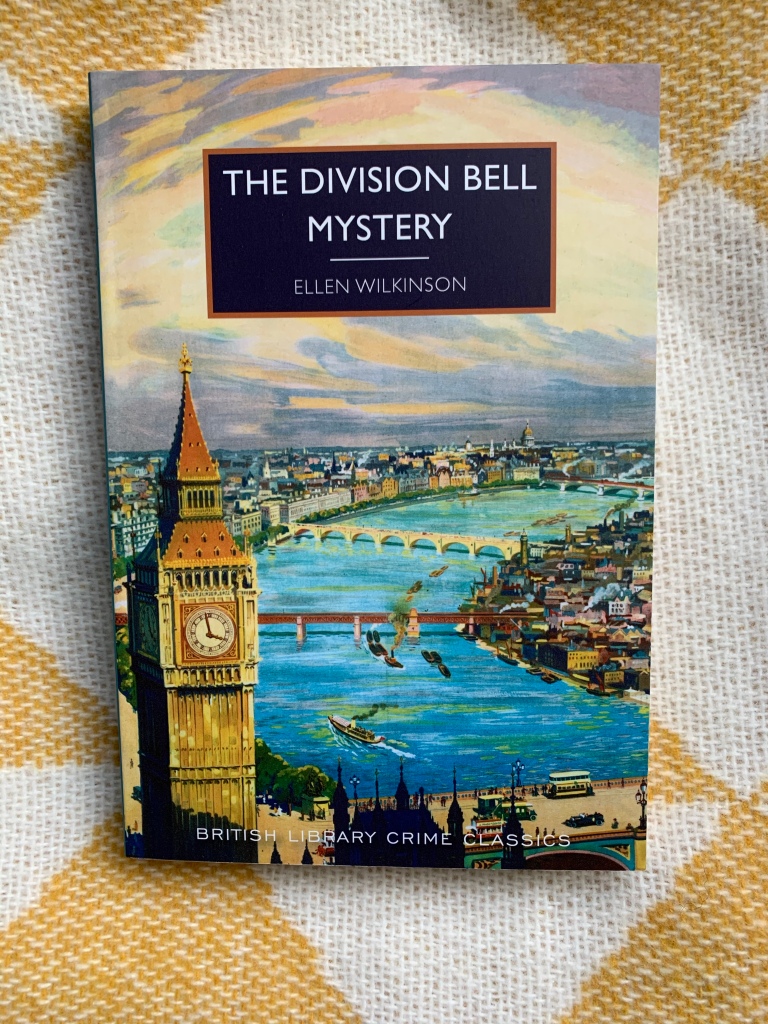 When a wealthy American businessman dies while having dinner inside Parliament, at first it looks like suicide, while he was alone in the room as voting was taking place but the evidence doesn’t add up.  Soon a young parliamentary private secretary plays amateur sleuth to try and work out what happened. This is a classic locked room myster, although I think you might need a bit of knowledge of how the House of Commons work for this to make sense. The Division Bell of the title is the bell that rings across the Palace of Westminster (and in some nearby drinking establishments) when MPs are called to  go and vote (which is called a division because they divide into two lobbies, the Ayes and the noes) but for the most part Ellen Wilkinson has explained everything you might need to know.  In fact Wilkinson, was one of the first female MPs and so the book is filled with insider details about what Westminster was like in the 1930s – and more than a few digs at the male-centric nature of it all.

I love a Golden Age crime novel as you know, and locked room mysteries are always fun. This is quite traditional/of its time in terms of structure – friendly cop, amateur detective with some skin in the game, tame reporter, but that’s probably to be expected! I basically read this in one sitting, which tells you a lot as well. Wilkinson is a fascinating person even before you add writing a Murder mystery into the mix (go google her) and on the basis of this, I wish she’d written more. The Division Bell Mystery is part of the British Library Crime Classics series – which is a fairly reliable source of forgotten mystery stories – I’ve featured several others as BotW before* – some are great, sometimes you can see why they might have been forgotten!  Heffers had a whole load of them on Sunday and they were on 3 for 2, so of course I got three.

If you’re not going to Heffers, then you should be able to find a copy from all of the usual sources as well as on Kindle (£2.99 at time of writing).  Most bookshops will have a selection of the British Library Crime Classics too if they don’t have this one.  I also recommend Murder Underground by Mavis Doriel Haye – which seems to be one of the more commonly stocked books in the line.

*Previous BotW’s from the series include: The Sussex Downs Mystery, Death of an Airman, and The Cornish Coast Murder – all of which you can see in the photo of the Heffers display and Silent Nights, which I don’t think you can!

4 thoughts on “Book of the Week: The Division Bell Mystery”