As I have now mentioned a few times now, I’m on an Amelia Peabody re-reading spree at the moment, but I am reading a few new things too and as last week was the Presidential Inauguration in the US, I’ve gone for a US politics book for this week’s BotW.

Rachel Maddow is an MSNBC host and journalist and Michael Yarvitz is her producer. Bag Man is the book of their Peabody-winning podcast of the same name about Spiro T Agnew. If you’ve heard of Agnew at all, it’s probably as part of a trivia question about some aspect of Gerald Ford being the only person to serve as US vice-president and President without having been elected to either office. Maybe, if you did a module on US 20th Century history like I did at GCSE, you’ll know that he was Nixon’s vice-president and half think that he resigned over something to do with Watergate. If that’s the case, you’re wrong. Agnew actually resigned as part of a corruption scandal – as prosecutors were closing in on charges of bribery, conspiracy and more, he agreed a deal with prosecutors where he would plead no contest to a tax charge in return for his resignation and not getting any jail time. All this was going on in the background of the Watergate scandal – and fears at the Department of Justice that if Nixon resigned, he would be replaced by Agnew who they had evidence had taken bribes – and was still taking bribes even as he worked in the White House.

I was absolutely engrossed in this – to the point where I’ve both read the book and listened to the podcast alongside it.  The podcast has all the key points – and you get to hear actual audio from inside the White House as Nixon and his staff discussed what was going on, but the book can go into more details about everything. As an MSBC host, Maddow is towards the liberal end of the political spectrum and part of the reason for the podcast and the book are the parallels between Agnew’s style of defence and that of President Trump, as well as the fact that his case is the basis for the ruling that the President cannot be prosecuted while in office (but the vice-president can) that President Trump often cited. But even without that the story of Spiro Agnew is one that should be better known – when Agnew pled no contest in court, the prosecutors submitted a document detailing what Agnew was doing – involving actual cash in literal envelopes  in return for giving state contracts. Agnew is a bombastic character who commanded enormous support from the Republican Party by being further to the right than Nixon. In the final part of the podcast, some of the guests set out the idea that the removal of Agnew may have made Nixon’s impeachment easier – because one of the things holding the Democrats back was the idea that if Nixon went, then Agnew would be president instead. 1973 was a hell of a year for American politics, while everyone was looking at Watergate, all this was going on at the same time and has mostly been forgotten.

I love a politics book and this is definitely that. But if you’re hesitating because you’re all politics-ed out at the moment, then I would say that it also fits in to the group of really good, easy to read narrative non-fiction and history books that I’ve recommended before – like Bad Blood, Catch and Kill and Furious Hours. My copy came from the library, but it’s available now on Kindle but it feels pricey at £10.99 and for a slightly better £6.39 on Kobo as well as as a hardback but if you’re interested in this one, obviously the first part of the podcast would be an easy (and cost free!) place to start.

I didn’t read many books last week, but I did read a lot of pages of various non-fiction books and this was my favourite of them.

First in Line is Kate Andersen Brower’s book about the American vice presidents of the modern era. Part group biography, part examination of the shifting nature of the role, it also takes a look at the early days of the Trump White House and the role of Mike Pence in the administration.  Looking at 13 vice-presidents as well as the responsibilities of the job and how a presidential running mate is selected, Brower has spoken to all six of the living vice presidents – and the insight this gives the book is great. Brower’s writing style is breezy and accessible and the book is peppered with anecdotes and personal stories.

The first six chapters cover the broad strokes of the role – the vetting process, where the VP lives, what the VP does and the basics of the various different types of relationships that there can be between the President and his second in command. The final seven chapters then take a more in depth look at the different partnerships in the second half of the twentieth century – from Eisenhower and Nixon onwards. I don’t think you need much background knowledge going into this – if you know the vague outlines of what happened in America post World War 2 you should be fine.

I found this fascinating. I knew the vague outlines of the process by which the vice president is selected and what the role of the job is, but I hadn’t really realised that the VP’s official residence was such a recent development – or how widely the relationships between the Commander in Chief and his deputy had varied. All the relationships are interesting, but I found the contrast between Nixon and Bush really fascinating – both were Republican vice presidents who became presidents but they had very different experiences.

Brower is somewhat of a specialist in writing about the occupants of the White House – her first book (which I haven’t read yet), The Residence, is about the house itself, her second (which I have) was about the modern First Ladies, and her latest book – which came out as an ebook last week and will be out in hardback next month – is called The Team of Five: The Presidents Club in the age of Trump, and looks at what it is like to be one of the living former presidents at the moment. She’s spoken to President Trump as part of the process – she’s written a teaser article in the current edition of Vanity Fair – if you want a taste you can read it here.

And finally – you know how sometimes you read a bit in a book and it really resonates with your experience? Well at the bottom of page 288, Brower says:

Unlike [Dick] Cheney, who had no interest in the presidency, when he was vice president, when Pence goes to the Hill to “touch gloves’ as he says, on a weekly basis, he insists on walking through the Capitol Rotunda so that tourists can get their photos taken with him.

And here is my photo of Mike Pence doing exactly that on the day that I toured the Capitol right at the end of my posting in Washington a couple of years ago. 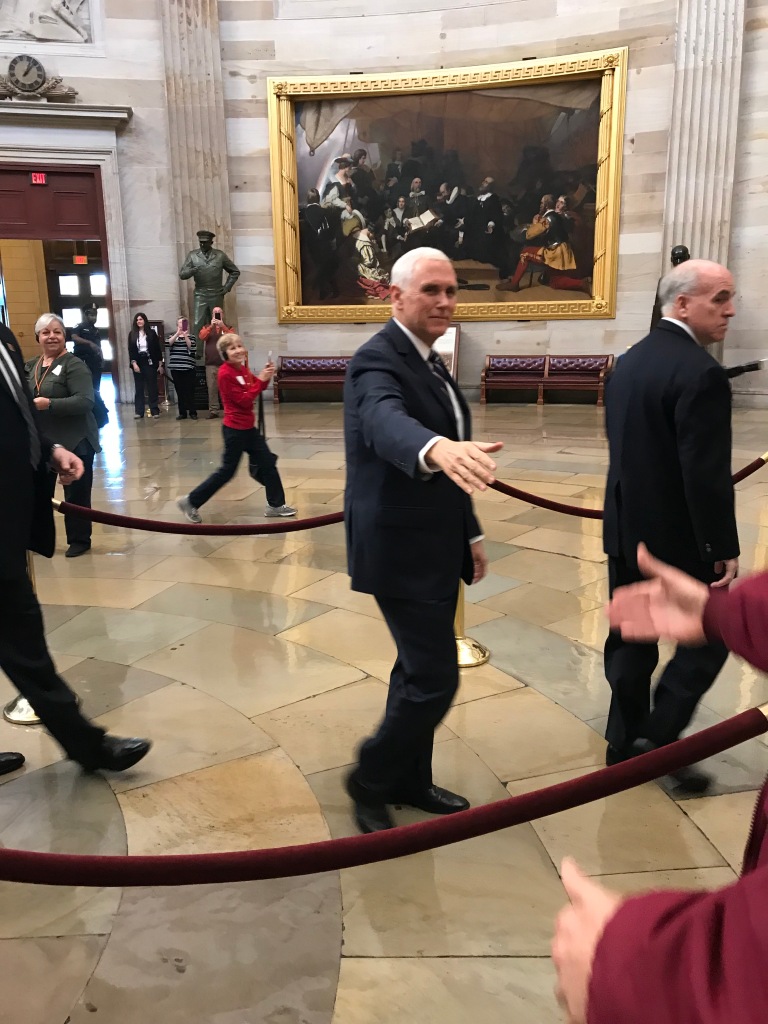 If you want to read First in Line it’s available as an ebook on Kindle or Kobo as well as in hardback. I suspect you might have to order it in though rather than find it in stock when you call your local indie. I’d also recommend First Ladies and having read both (albeit some time apart) I don’t think there was a lot of repetition.