As I mentioned yesterday, was a bit of a week last week and there nearly wasn’t a BotW post this week – until I finished this on the train home on Sunday evening.  And after a long spell without an essay collection as a pick, we’ve now had two come along in quick succession.  Such is the way of reading. Or more accurately, such is the way of library hold queues.  This also continues a bit of a theme of things that I discovered through Jon Stewart, which includes previous BotW Jim Henson: A Biography (and you could argue Born A Crime as that’s where I first saw Trevor Noah – when he was a correspondent before he got the gig when Jon left) as well as a whole host of books people, shows and music I haven’t written about here, although the list here will expand further tomorrow. Aren’t I a tease?! 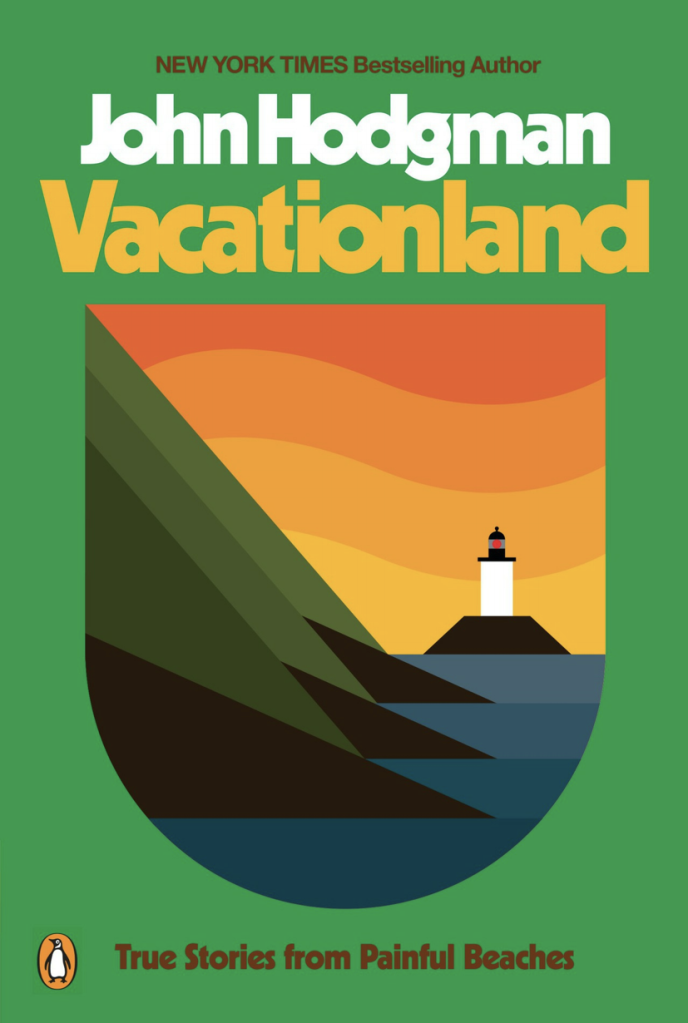 Anyway, you may know John Hodgman for his turn as Deranged Billionaire* on The Daily Show in the Jon Stewart era.  Or as the PC in the apple ads in the 1990s. Or for his Judge John Hodgman podcast.  Anyway, he’s carved out a bit of a niche for what he calls in the book “Privilege Comedy”.  This is a book of essays which form a memoir about his travels through two states – Massachusetts, where he spent his childhood holidays and early adult summers and Maine, where his wife spent her childhood holidays. It’s also about losing a parent, realising that you’re a man in your forties, actually a grownup and that you need to learn to deal with it, and that freshwater clams are scary.

My life is really quite different from John’s, but I found this funny, reflective and thought provoking.  It’s also a lot more real than I was expecting given John’s stage personas.  I saw him do Judge John Hodgman live a couple of years back, and while it was very funny, it was definitely a performance of a character.  This is not that. I came away feeling like I had more of a handle on who he is behind the act, and what makes him tick.  He’s also very aware of the position that he is in, as a well-off white man and points out all the things that he is able to do (and tell you about) in this book because of that and that is refreshing in itself.

And as someone whose knowledge of New England comes almost entirely from Rich People novels and biographies or cozy crime, and of Maine specifically mainly from Murder, She Wrote, I felt like I came away knowing a lot more about that part of the American coast, what it looks like, how its economy work and what it really means when little towns in Maine or Massachusetts pop up in novels.

My copy of Vacationland came from the library, but it’s available in Kindle, Kobo and audiobook, as well as in hardback in the UK and paperback if you’re prepared to order in from the US. Foyles don’t have any available as click and collect, but say they can have the hardback to you in a couple of days, and Waterstones found one London branch and a brighton one with stock for click and collect so it is probably an order a copy job rather than a pop in and pick it up one.

Bonus picture: A terrible iPhone picture from when we saw him live!

Tough choice for Book of the Week this week.  An honourable mention goes to Trisha Ashley’s new novella A Vintage Christmas, but it’s quite short, and she has a new book out in October, so in the interests of keeping my powder dry, I’ll just leave you a Kindle link to it. Subtle right?  There was another close contender, but I’ve reviewed that for Novelicious, so in the interests of not stealing their thunder, I won’t tell you what it is. Yet.

I Feel Bad About My Neck got the nod because, although it’s aimed at a slightly more mature lady than me, this collection of essays and general thoughts on life made me really laugh.  In this, Ms Ephron takes a witty look at ageing, through the eyes of a baby boomer.  I think my favourite is the one about maintenance – and how long women spend on upkeep!

Nora Ephron wrote the screen plays for two of my favourite films when I was a teenager – When Harry Met Sally and You’ve Got Mail and I laughed my way through her novel Heartburn a few years back.  Heartburn is a fictionalised version of the break-up of her second marriage – and some of the themes from that reoccur here.  This isn’t a long read, but it is a very fun one.

My enjoyment of this book was tinged with sadness – as Nora Ephron was already suffering with leukemia at the time that she wrote this, although almost no-one knew that she was ill right up until she died in 2012. I’ll be keeping my eyes open for more of her other writing and it’s a shame there won’t be any more.

Get yourself a copy from Amazon, Waterstones, Foyles or on Kindle or Kobo.