I said yesterday that I had a harder week concentrating last week so retreated to favourite authors, and this came out last week so it was perfectly timed. It’s the first part of a trilogy, and I can’t for the life of me find a pre-order link for part two and it is driving me mad. Anyway, to the book. 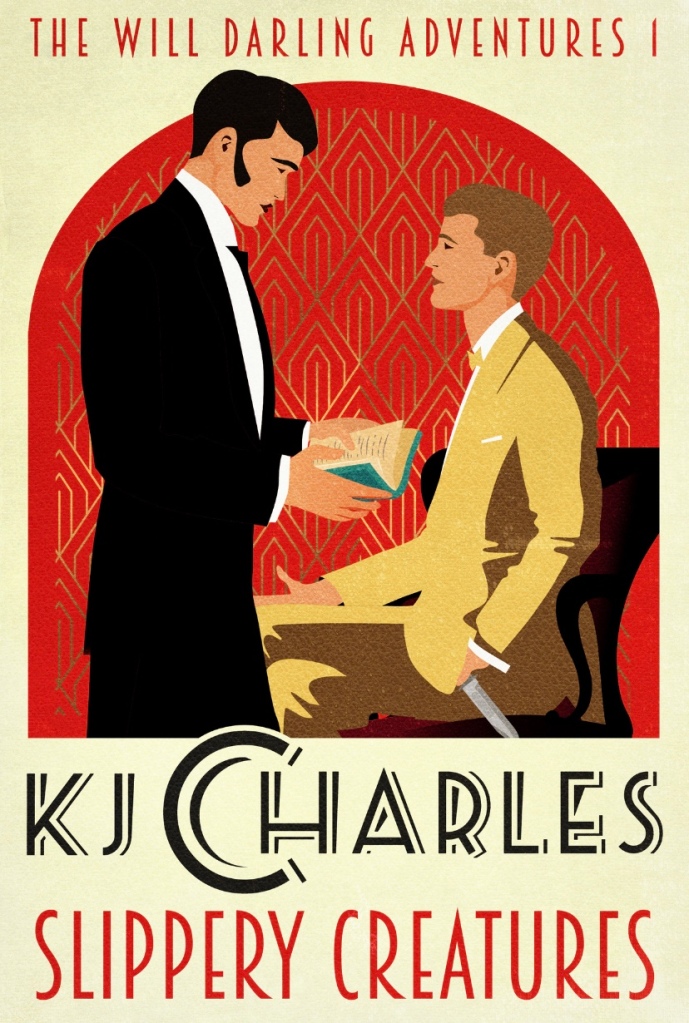 Will Darling made it through the Great War. After signing up at the start, he made it back to Britain with a lot of medals and a lot more mental scarring. But it turned out that the country he’d been fighting for didn’t really have much use for him. Sometime just before getting rock bottom he writes to a great uncle he’s never met and gets invited to help out at his book shop. But when the great uncle dies he finds himself caught between the War Office and some very unsavoury characters who want a secret he doesn’t possess. Enter Kim Secretan, attractive and helpful but with a murky past. And maybe present. But Will is trapped in a game of cat and mouse over a deadly secret – and Kim might be the only person who can save him.

The blurb says that this is a m/m romance in the spirit of Golden Age pulp fiction and I think that’s pretty spot on. It reminded me of some of the thrillers I’ve read by authors like Molly Thynne and some of the more adventure-y Albert Campion stories. A warning for the romance readers thought: this is very much part one of the story – and everything is not tied up at the end. If you only want Happily Ever Afters, maybe wait until the whole series is out and then you can read right the way through to the end without having to wait. I could just about handle not having proper resolution because the story and the characters were so much fun. I’ve read about half a dozen of KJ Charles books before, but they were all Victorian set. I raced through it and if it has been possible I would have gone straight on to the next part. But it isn’t so I’m having to wait. I happen to like a 1920s setting more than a Victorian one, and I love an adventure story, so this ticked all my boxes really – and I love that authors are moving into this period a bit more. If you read and liked Hither, Page last year, then this would scratch that itch while you wait for another instalment there. Although obviously: more waiting!

Anyway, I bought my copy of Slippery Creatures on pre-order and it’s out now on Kindle and Kobo and in paperback via Amazon (in what looks possibly like print on demand because I can’t find it via Waterstones or Foyles).

5 thoughts on “Book of the Week: Slippery Creatures”