The long-awaited Amazon/BBC Good Omens adaptation goes live on Amazon Prime today, and I’ve had a couple of conversations with people about where to start with Terry Pratchett. So I thought this was a good time to do a quick bonus post about one of my favourite authors because the answer is not simple. But first, here’s the Good Omens trailer:

So obviously, if you enjoy Good Omens, then read that first. There are snazzy tie in editions and a script book and all sorts to coincide with the TV event, you should even be able to pick them up in the supermarket I could have thoughts. But obviously Good Omens is co-written with Neil Gaiman and is in an alternative version of the real world. So where next? Well, that depends what you like to read the rest of the time. And this is one (rare) occasion where I wouldn’t suggest starting at the very beginning. Why? Well unless you’re already a fantasy reader (and if you are why haven’t you read him already?) then these are the furthest away from what you’re used to and they might scare you off. They’re not the most accessible and (imho) they’re not his best. The series improves as Pratchett develops the world and its many characters and leans into the satire of our real world.. Luckily there are series within the series and other ways in.

This is a very non traditional choice, but I actually think The Truth is actually a really good place to start. It’s sort of stand alone but it’s also the first of the Industrial Revolution books and is centred on the invention of the printing press and what happened next. It’s got the later Pratchett social satire, but it also has some of the key features of other series: it’s set in Ankh Morpork, the City Watch appear, the Patrician features and there’s a sprinkling of the supernatural- vampires, werewolves and magic. And if you like it, depending on what your favourite bits are, it’ll give you a clue about where to read next.

Now, if you like what you see of the Watch in The Truth, then try Guards! Guards! You’re jumping back in time, but it’s the first book in the Watch cycle.  If you like police or crime-y type stories usually, this might also be your best place to start.  There’s a nice new* edition at the moment with an introduction from Ben Aaronovitch – so if you like his Rivers of London series (and lord knows I do) then this is your best jumping in point.  This has a rag tag team of misfits who are the night watch and their reluctant leader Sam Vimes trying to figure out who is trying to take over the city – and stop them.  I love it.  Vimes is a wonderful creation – but then Pratchett is full of wonderful creations. Wikipedia describes him as “somewhere between an  Inspector Morse-type ‘old-school’ British policeman, and a film-noir-esque grizzled, jaded detective” and I think that’s pretty much right.  He doesn’t want to care, he definitely doesn’t want to be The Hero, and yet it just seems to keep happening.  There are eight novels about the Watch – and there’s a TV series that’s been in development since before Sir Terry died, but which seems to be inching closer to being a reality. I’ve got everything crossed that it will materialise eventually.

If you like the magic-y type stuff, then go and read Wyrd Sisters.  This was actually my first Discworld book, recommended by a wise librarian when I was at the bottom end of secondary school**.  Wyrd Sisters is twisted Macbeth but with witches running the show.  It’s also the first really big appearance*** of the most beloved characters in the series – as the blurb says witches “don’t have leaders. Granny Weatherwax was the most highly-regarded of the leaders they didn’t have.”  I love Granny and her gang and they’re a great jumping off point for the series in a very different part of the Disc. And once you’ve read them, maybe come back for the wizards.

If you’re still unsure where to go next then try Mort. Mort is a young country lad who ends up apprenticed to Death himself, and it really isn’t what he expected.   Mort was the top rated Pratchett book in the BBC’s Big Read list back in 2003 – coming in at number 65, three places in front of Good Omens and one of five Pratchetts in the top 100 (with 15 in the top 200!).  Mort and Death are an excellent double act, Binky the horse is brilliant and if you like this strand then Soul Music is one of the best take offs of popular music you could hope for.  Death appears in pretty much every book in the series as well as in Good Omens – so Mort is also an excellent place to start if you read Good Omens and want more of him. It’s also the fourth book in the series and is the earliest of alternative starting points.

As well as having read the books, I also own a lot of the audiobooks – the early series are mostly done by Nigel Planer (or Tony Robinson for abridged versions) and the sound quality on audible is described as “vintage” (it’s awful for some of them – I actually returned at least one!) but Stephen Briggs takes over at book 24 and I love his narration  My most listened to are the Moist Von Lipwig books. They’re the next stage of the industrial revolution series that starts with The Truth (or Moving Pictures depending on how you’re reckoning it) and I think Going Postal is my favourite of the entire series, and not just because I was a stamp collector as a child. For me, they’re the culmination of everything that has been going on in the background through the other books with Vetinari’s vision for the city and Pratchett’s satire on modern life. I know some don’t like Raising Steam and get a bit touchy about the latter books in general, but my only really problem with it is that Adora Belle has the wrong accent in the audiobook and that’s Stephen Briggs’s fault not Sir Terry’s.

Usually I would suggest the middle grade part of the series much earlier than this. But although I love Tiffany Aching and the Nac Mac Feegles are brilliant, as an adult, if you’re going to read these you need to have read the Witches’ books first so you get the full impact of The Thing That Happens in the final book in the series, The Shepherd’s Crown.  But once you have read the Witches – or if you have a middle grader – The Wee Free Men is the place to start.  One of the other middle grade books, Amazing Maurice and his Educated Rodents, is on offer at the moment but it’s the only Discworld that I haven’t read so I can’t tell you where to fit it in at the moment – but I’ve bought it and I’m gong to fix that!

And finally there’s Rincewind. He’s the first running character and he comes with the Luggage (I want a Luggage), but he is in at the very start in the highest fantasy the series has. Go discover him once you’re already in love with the series. It’ll work best for you if you’re not a fantasy regular.  Start with the first book – The Colour of Magic – and go from there.  This was one of the ones that Sky turned into a mini series along with Hogfather and my beloved Going Postal (which has early Clare Foy as Adora Belle!) and is actually worth a look. I liked it as a version of the first two books, and they do make them rattle along.  There are nine Rincewind novels – the longest of the strands through the series.

There’s so much more I’ve barely touched on here, but so I don’t turn into any more of a boring fangirl, I’ll leave it here, except for saying that with 80 million book sales around the world you really should give it a try.   If you’re a Pratchett fan, let me know your favourites in the comments and tell me where your recommended starting point for newbies is.  I’ve put a nice graphic in below – but that doesn’t even reckon The Truth is a starting point, so you can see how many different options and opinions there are.  I’m off to read Maurice and watch Good Omens (not at the same time). 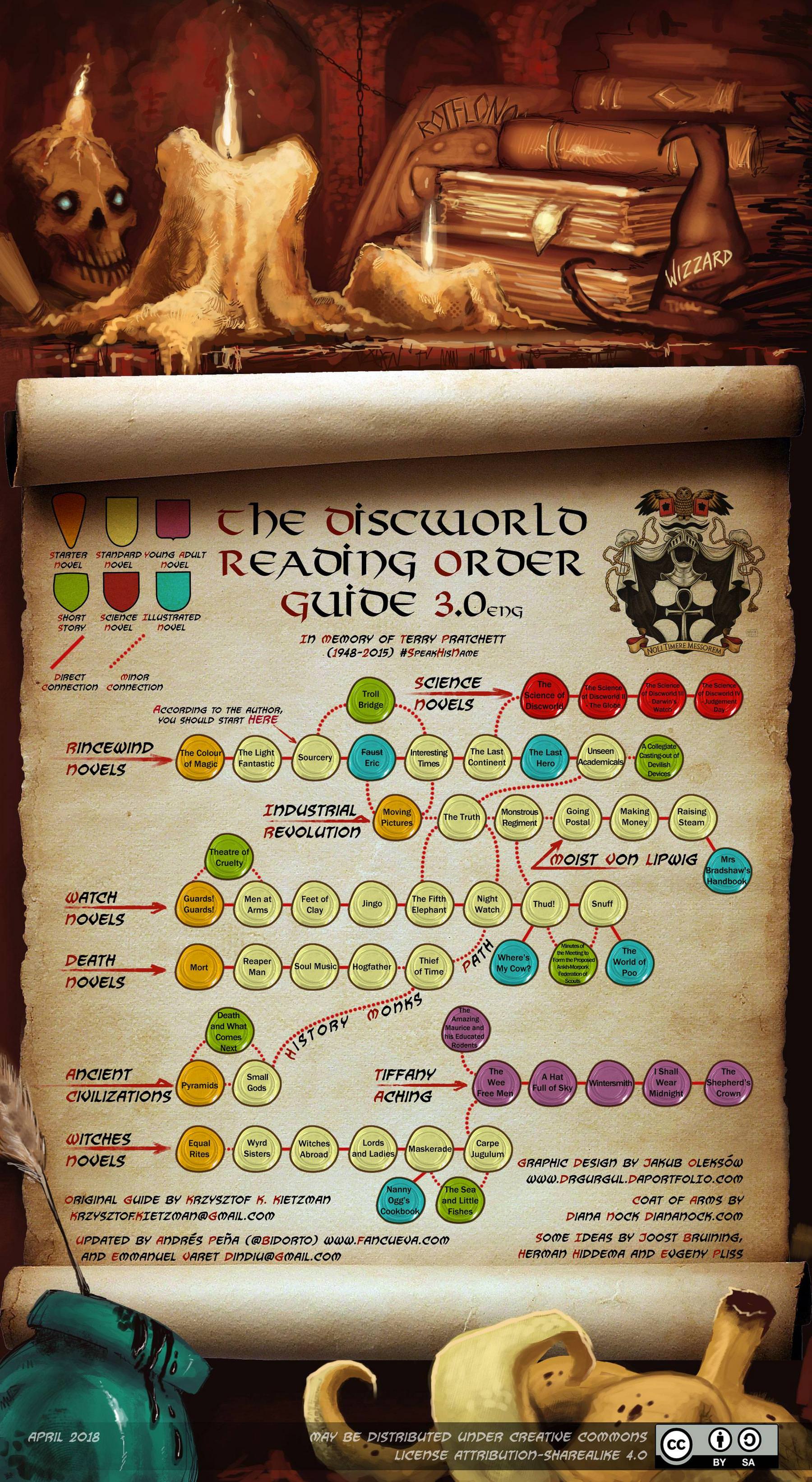 *these new editions have proved… controversial with some of the Pratchett fans – because they don’t look like Pratchetts – but that’s precisely the point.  They don’t look like fantasy because there are a lot of people who don’t read books with the sort of illustrated covers that these have previously had.  Think of it as the equivalent of the adult cover Harry Potter books.

**I can remember Jingo coming out (but i’m not sure if it was the paperback or hardback) and being excited about it, which dates the start of my Pratchett reading to 1997ish.

2 thoughts on “Bonus post: Where to start with Terry Pratchett”