It’s the last day of the month, and that means a stats post tomorrow, but before we get to that, here’s another Book of the Week post for you! Today’s pick may have taken me a while to finish – but it was an absolutely stonking read. This isn’t the first time I’ve recommended a space race-related book here – Lily Koppel’s The Astronauts Wives Club was a pick a couple of years ago (Editors note: more than four years ago, doesn’t time fly!) so maybe this isn’t a big surprise to you all, but it is a bit of a change from the recent run of BotWs which have been mostly romances and and romance adjacent. 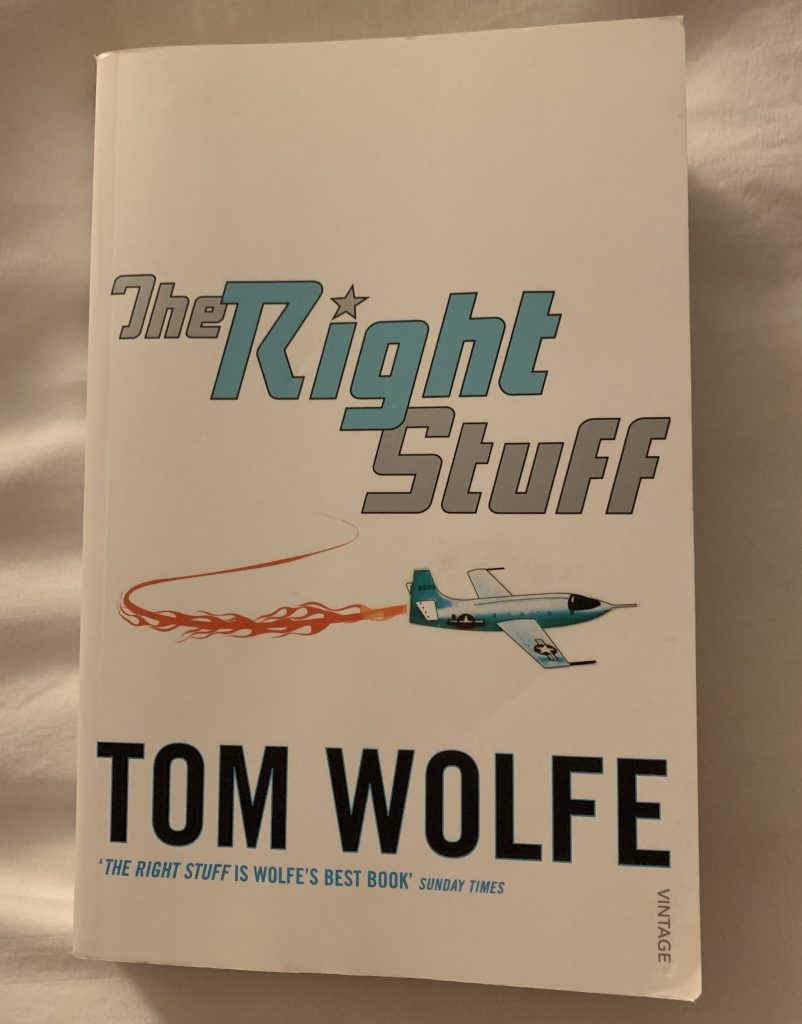 This is pretty much a modern classic of narrative non-fiction. Tom Wolfe tells the story of the American journey into space, starting with the history of America’s military aviators and test pilots, through the selection process to pick the Mercury Seven, then their training and the rivalries within the group and outside. Based on interviews with the astronauts, their wives, the test pilots it will take you through the early days, the competition with the test pilots working on rocket powered aircraft and the friction between the administration and the astronauts who wanted to actually pilot the missions rather than just be cargo and right to the to the end of the Mercury missions. It covers the selection of the second batch of astronauts (the New Nine) but doesn’t go beyond into the Apollo programme and the moon shot, which is probably a good thing, because you’ve grown attached to these guys and, spoiler alert, the Apollo programme did not always go well.

It is incredibly readable, for the most part you don’t want to put it down. But be warned, in the early stages where it talks about pilot training and testing, there is an incredibly high rate of attrition, which meant that I needed to pace myself a bit in reading it and is the main reason it took me longer to read*. I don’t even think you need to have any prior knowledge of the space race really, although obviously it helps. If you saw First Man last year, like I did**, it makes for a great companion piece to that very introspective look at one astronaut’s life, as it takes in the broad sweep of American ambition in space, the competition with the Soviet Union and the public and media attention that focused on the men they hoped were going to restore American dominance in the heavens.

I remember people telling me that I ought to read this back when I reviewed the Lily Koppel, but it took until Tom Wolfe’s death last May for me to get around to adding it to the to buy pile.  There has been a new edition since my version – which has a snazzy new cover and, more importantly, an introduction from Scott Kelly, the astronaut who spent a year in space a couple of years back and was (probably still is) the subject of a study into the long term effects of being in space as he has an identical twin brother (Mark Kelly, also a former astronaut who is married to former US Representative Gabrielle Giffords and who himself is making a run for Democratic nomination for one of Arizona’s Senate seats) which enabled almost direct comparison.  After reading this, I’ve got a mad yearning for more space books, but also to read more of Wolfe’s works.  So I went for a wander on Amazon and discovered that Bonfire of the Vanities is only £2.99 in paperback there at the moment.  I may have bought myself a copy.  Oopsy daisy.  And I have a couple more sitting in my shopping basket, waiting for the tbr shelf to empty out a little.  If you have any other recommendations for where I should go next – drop them in the comments.

You should be able to get hold of a copy of The Right Stuff from any reasonable book store, it’s also available on Kindle and Kobo and I suspect that you’d have a good chance of finding a copy of it in any reasonably sized charity or second hand bookshop.

*the other reason being my long-standing rule about not taking books I’m more than halfway through on overnight trips, or books I have less than 100 pages to go on the train for the daily commute.

** I saw it at the IMAX at the Smithsonian, having spent an afternoon looking at actual space race artifacts.

2 thoughts on “Book of the Week: The Right Stuff”