Another week, another BotW post. This time I’ve gone for VE Schwab’s A Conjuring of Light, which is the final book in a trilogy, so it does break my rule about trying not to feature books that don’t stand-alone, but it also means that if you were to start the books now, you’re guaranteed a resolution. So swings and roundabouts really. 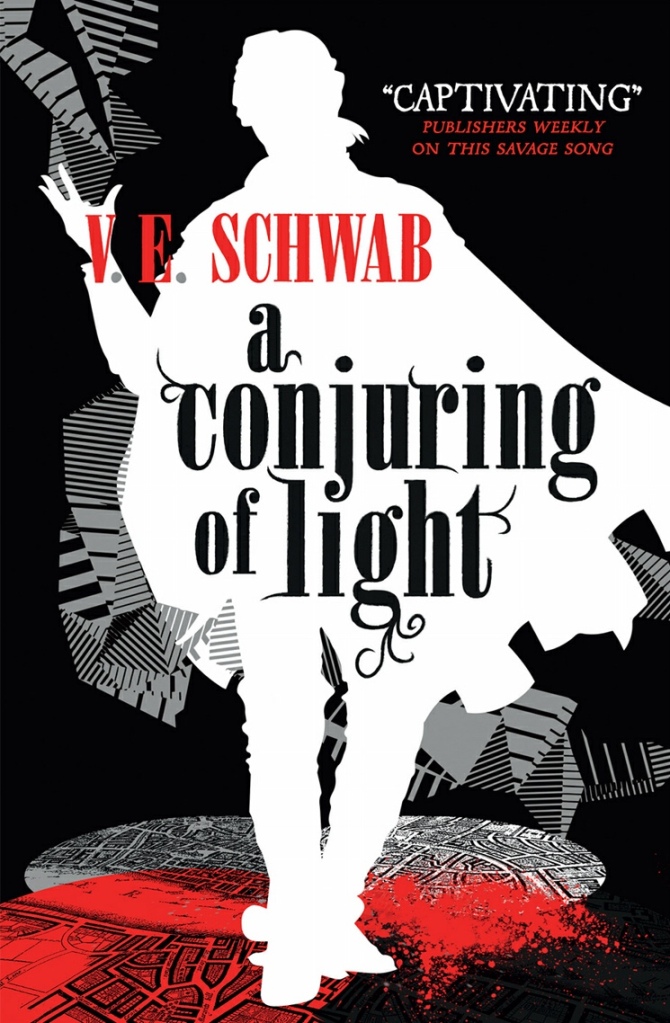 Anyway, this is the third (and final?!) book in this magical series in a universe where there are three different Londons in three parallel worlds that only a select few can travel between. In the first few books we see a lot of Grey London, where there is no magic (basically Regency Britain as we know it) and White London, where there is nothing but violence and magic. But this final book concentrates on the battle for Red London where magical and non-magical people exist side by side.

Red London is also where Kell is from, the traveler between worlds who we’ve been following since the start. Over the course of the books, Kell’s life has only got more complicated, but that also means he’s got more friends as well as more enemies. Friends like Delilah, the former thief who he teamed up with in the first book and her motley crew too. Everything that he and Delilah have learned over the course of their adventure comes to a climax in this.

And yes, I know that sounds like I’m avoiding talking about the actual plot. And that’s because I am, because saying much more will give away the plots of the other two books. And you really need to read this series in order or you’ll be lost. It’s been a couple of years since I read it and I felt a bit at sea at times and I know what happened and what the rules are. But there’s magic and pirates and peril and a big battle or two. And although it doesn’t quite reach Battle of Hogwarts levels of carnage and loss, it’s fair to say that not everyone comes out of it alive.

If you’ve read The Night Circus and The Children of Blood and Bone and thought that what you really need to read is a hybrid of the two, then try this. It wasn’t always 100% my cup of tea (I need less angst at the moment) but it’s pacey and well written and clever and really quite good.

My copy came from my library, but you should be able to lay your hands on this fairly easily on Kindle and Kobo as well as in paperback from all the usual sources, including actual bookshops.  I do suggest you start at the start of the trilogy though or you’ll be totally lost. There’s also a graphic novel prequel series that’s just started but I think you need to have read the books for that. I’ll check it out and let you know…

1 thought on “Book of the Week: A Conjuring of Light”