Yes. I know. I’m so far behind the curve it hurts.  This always happens.  You know this always happens. This is the problem with giant to-read backlog.  It’s the whole raison d’être for the blog.  Anyway.  As you will have seen yesterday, I read a lot of stuff on holiday last week, and I’ve already written about one of last week’s books, so that’ was ruled out.  And some of the other books that I read were out for this because of a) other posts I’ve got planned or b) not liking them enough to want to recommend them.  I’m honest like that.  But luckily, at the end of the week I found my copy of Simon vs the Homo Sapiens Agenda again and read it pretty much in one sitting, so I feel like I can genuinely make it a BotW. 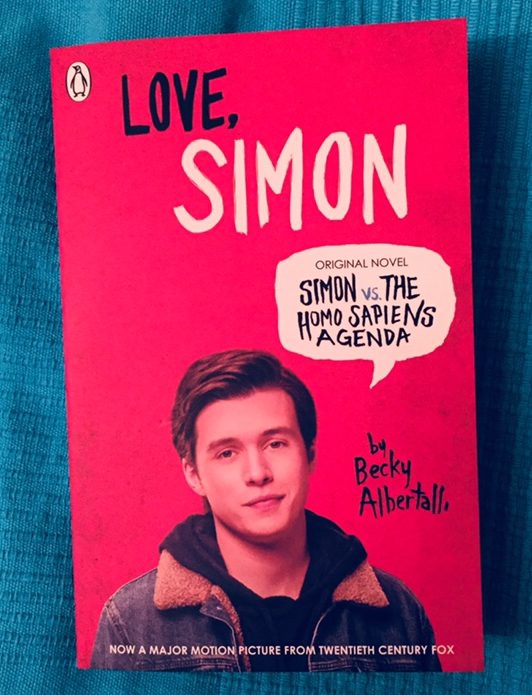 In case you’ve missed it somehow, this is the story of Simon Spier.  He’s sixteen and he knows he’s gay but he’s definitely not out at school.  But he’s got an email correspondence going with another boy at his school who is also in the same boat.  Simon doesn’t know who it is, and Blue doesn’t know who Simon is, but they’re getting on really well.  But when some of the email correspondence falls into the wrong hands, Simon finds himself the target of a blackmailer and on top of this, his friendship group starts to get really complicated.  How can Simon sort it all out?

In case you’ve missed it, this was recently turned into a film, under the title Love, Simon, and originally I was going to read this before the film came out.  Well we all know how well that’s turned out.  But having read the book, I can totally see why the film has struck a chord with people and got the almost universally positive reviews.  It’s a relatable, readable, page turner about a young man trying to navigate High School.  It’s a story we’ve heard before and which has always been my catnip.  The difference here is that the hero is gay and that’s not a story I’ve really seen done before.  And Becky Albertelli has done a great job for my money.  Obviously I’ve never been a gay teenage boy, but for me it captured the experience of being a teenager – how everything is life and death and how school is a complete minefield that has to be carefully navigated – but with an experience outside my own that I was really interested to read about.  I’m not a big YA reader, but would happily have read another 100 pages of it – and not just because it doesn’t involve teens killing each other or dying of cancer.

As previously mentioned, I’m way behind the curve, so you should be able to get a copy of Love, Simon anywhere – my copy is the movie tie in edition as you can see so watch out for the two different titles kicking around.  Try the supermarkets and the secondhand bookshops for sure.  The Kindle edition has also popped up as a Daily Deal more than once as well. And the DVD of the movie is out in August, so it’ll probably be popping up on the streaming services soon too. Albertelli has a sequel of sorts out now too – Leah on the Offbeat – which focuses on one of Simon’s friends and which I’ll definitely be looking out for.

1 thought on “Book of the Week: Simon vs the Homo Sapiens Agenda”