In case you didn’t notice, I read a lot last week.  I’m quite pleased with me.  Whether I remain pleased with me entirely depends on how far down the library book pile I get before I leave for the UK on Friday.  But despite the multitude of choices,  it was still hard to pick a BotW – not because there wasn’t anything good in the pile, but because there’s a few things on there that I want to write about elsewhere.  Luckily Jennifer Crusie’s Anyone But You was there to help me out – a standalone romance, with no series implications.  But hopefully you’ll be seeing a couple of other posts from the fruits of last week’s reading too.  Anyway, to the review. 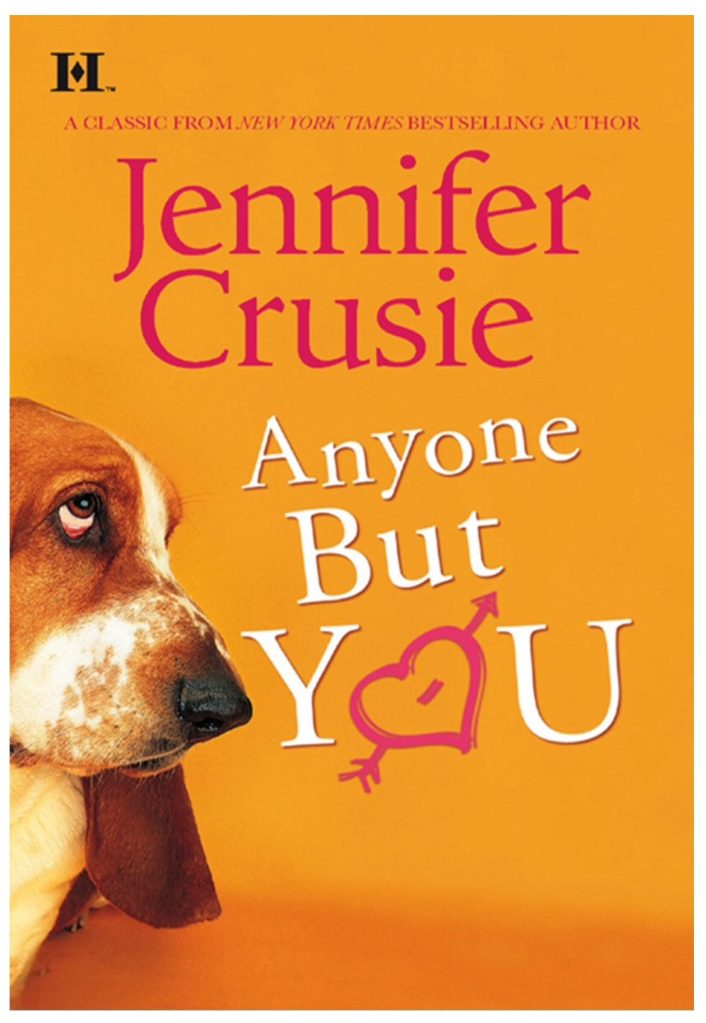 Nina Askew has just escaped her marriage.  She’s celebrating having freedom to do what she wants and not to try and be the perfect wife supporting her husband’s career any more by getting a rescue dog from the pound.  So what if she’s 40 and her family (and her ex) keep telling her that the divorce is a mistake.  She knows it’s the right thing to do, so she settles down in her new flat with her new dog.  Fred’s not exactly the dog she was expecting to get – he’s old, smelly and looks depressed – but he’s also the reason she meets her downstairs neighbour, Alex.  He’s a hotshot ER doctor, from a family of doctors who think he’s wasting his skills in the Emergency Room.  He’s also funny, smart and sexy and soon the sparks are flying between then.  But Nina can’t get past the fact that he’s ten years younger than she is – and he can’t get past the fact that he can’t give her the life he thinks she’s used to.  Can they sort out their differences for a happily ever after?

You know where this is going, it’s a romance, so obviously they can sort things out.  But this is funny, and sexy and has a great cast of supporting characters – from Nina’s unlucky in love best friend who’s writing a book about her failed relationships, to the septagenarian fitness lover on the top floor and her boyfriend.  Older woman/younger man is not usually a trope that I read, but somehow Jennifer Crusie made this one of my favourite romances that I’ve read recently.  The will-they-won’t-they in this is just so perfectly done – it never feels overplayed or dragged out, so you end up rooting for them all the more.  Some of their misunderstanding could be sorted out by serious discussion – but Crusie keeps it so that they’re not at a point where they can have that discussion – they’re just friends who watch movies together who don’t realise that they’re both feeling the same way.  And although it’s not specifically an autumn or winter-set book, some how with all the movie watching and the dog, it just felt like the perfect book to curl up on the sofa with at this time of year.

I got my copy from the library – it’s quite an old book so it looks like second hand is the way forward if you want a physical copy, but the ebook is quite reasonably priced on Kindle and Kobo.

1 thought on “Book of the Week: Anyone But You”

Follow Verity Reads Books (lots of them) on WordPress.com
Join 1,641 other followers